Today, Nik and I are celebrating eight years of marriage.  Over the past four years, I’ve commemorated our anniversary here on the blog by expressing our thankfulness for Ellie (year #4), by announcing our pregnancy with Mark (year #5), by showing you heart-shaped pizza (year #6) and by showing you one picture for each year of our marriage (year #7).  We even had anniversary mayonnaise for our first anniversary (just posted  a few months late).  So how can I top all of that?

How about taking a tour of our yard?!?! (That’s just as exciting as a pregnancy announcement, right?)

Over the past eight years, Nik and I have learned a lot about what it means to be married and about how to live in the give-and-take and in the happy-and-sad.  We have a lot left to learn, a lot more we want to do, and certainly a lot of room left to grow.  As I was working in our yard this morning, I was thinking about how our yard is completely different than when we got married eight years ago.  Slowly (OH SO SLOWLY), we’ve been shaping it into what we want it to be and although I’m sure it will never be perfect, much of the major reshaping is finally done.  That’s a pretty good metaphor for marriage, right?  The first few years of marriage are when the major reshaping, pruning, planting and clearing goes on.  After that, I’m know there’s still a lot of weeding, pruning, and maybe even major changes to be done but just not so many at once (I hope!).

So, in honor of eight years of marriage, I’m giving you a tour of our eight-year old yard. Faithful long-time readers of my blog will know that I used to blog about yard work fairly frequently.  I haven’t in the past couple years so I suppose it’s about time for an update!

When we started working on our yard in the summer of 2007, it had clearly not been cared for in many years (other than mowing the lawn).  The bushes and trees were really overgrown/dying and the beds had almost disappeared underneath weeds.  We also had a vision for edible landscaping (thanks in large part to my aunt’s influence – thanks Aunt Zona!).

The beds on either side of our front driveway were covered in awful, evil grass.  Over the course of a couple summers, I dug out the sod and replaced it with creeping thyme on one side and a bunch of different native perennials on the other. 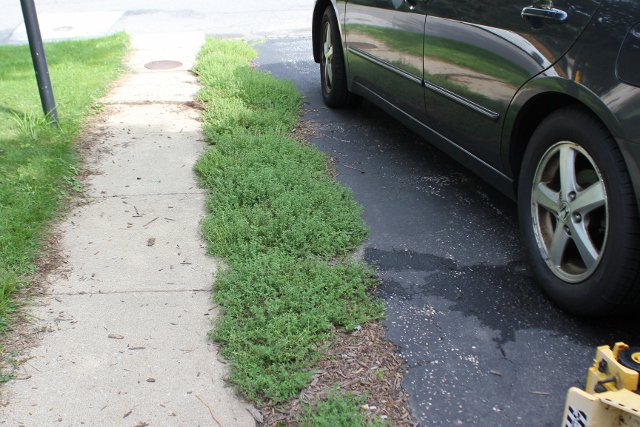 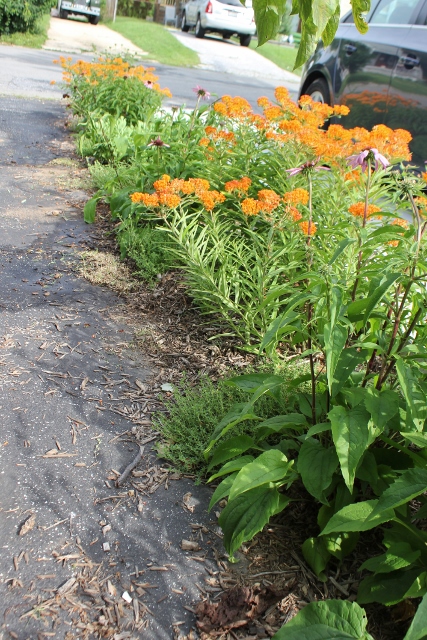 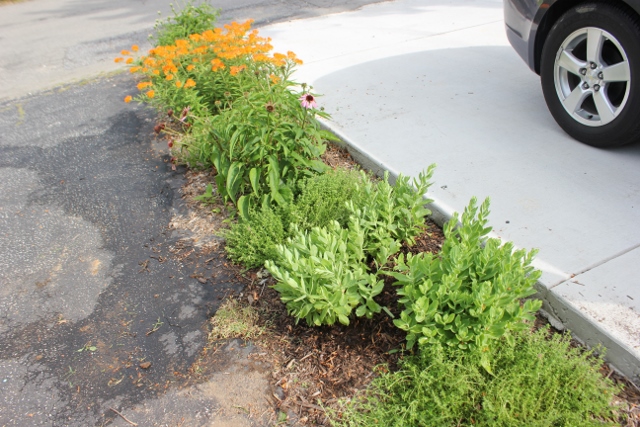 At the top of that same driveway, the bed used to be dominated by overgrown old azaleas.  One summer, Nik’s mom and I cut them way back and then a couple years later, I dug them all out.  Now, we have lots of rhubarb growing in them, as well as hostas. I’m still figuring out what else to do with it but at least it’s starting to be useful. 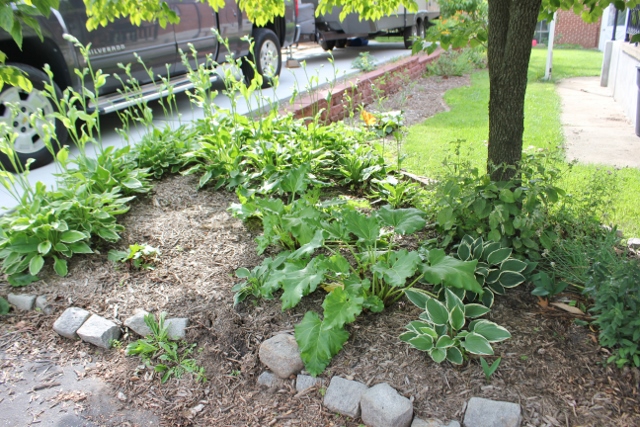 This long bed is what has taken us so many years to finish. Along with ripping out the old concrete block retaining wall/ old chain link fence and putting in that new retaining wall, we also had to design and dig out an brand new bed.  In this bed, there are blueberry bushes, rhubarb, perennial herbs (rosemary, thyme, oregano), other perennial flowers/plants, an apricot tree, and a peach tree. I want to add a lot more plants but it’s looking better. (This post gives you a good idea of what we had to start with while this post tells you what we were thinking about initially. Here it is in progress at the end of 2011.  I can’t believe we’ve been working on it for eight summers!) 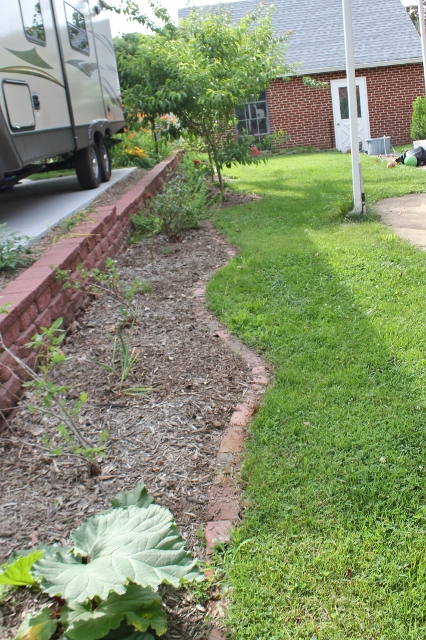 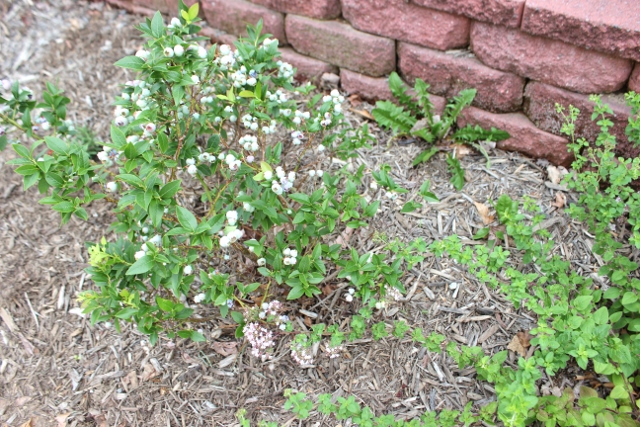 Along the back of our house, we’ve planted three fig trees.  The harsh winters we’ve had the past couple years have killed them back to the ground, but they keep on coming back and we’re excited to be eating more fresh figs this year. 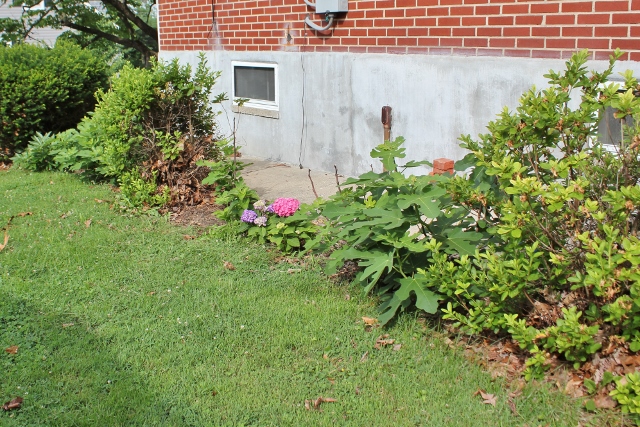 Our vegetable garden area is in complete disarray right now, but lest you think our yard (and our marriage) is in perfect shape, I’m going to show you that too. We’re in the process of getting rid of a couple really large shrubs and completely overhauling our raised beds.  In the midst of the mess are our temporary beds for this summer’s tomatoes, peppers, squash, basil, beans, and cucumbers. 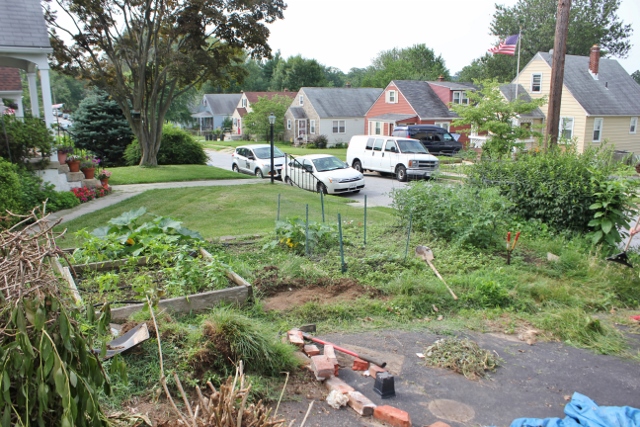 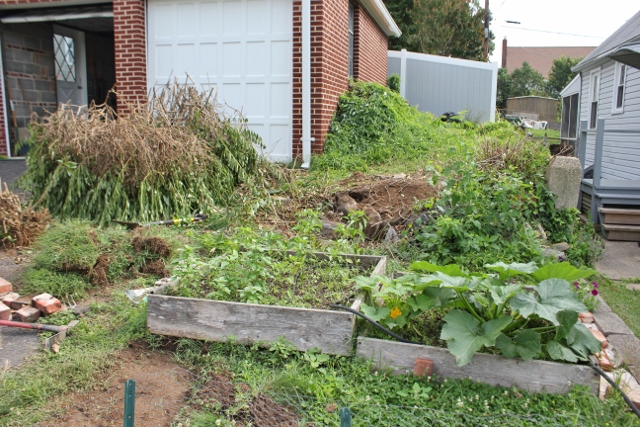 No marriage/yard is ever done, right?

On the other side of our house from the long bed, I’m working on beating back our ivy (complicated by the invisible poison ivy presence).  I’m partially done and have filled in the empty space with hostas and other shade-tolerant plants. Battling the ivy is an ever-present problem, sadly.  It’s been part of our marriage from the very beginning. 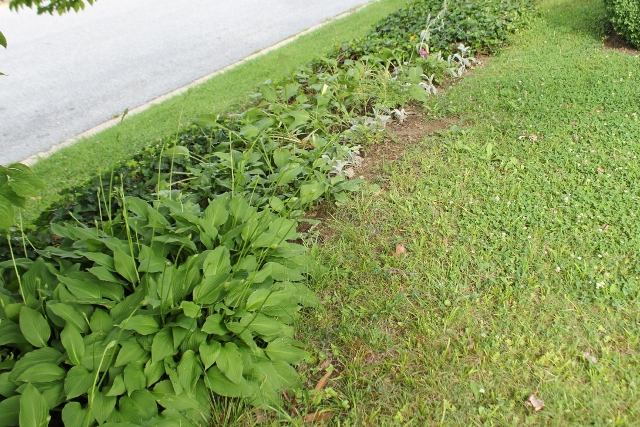 You can see the line of ivy at the back where I stopped digging it out.

Our front rock garden now has strawberries in front of it and nearby, two apple trees! 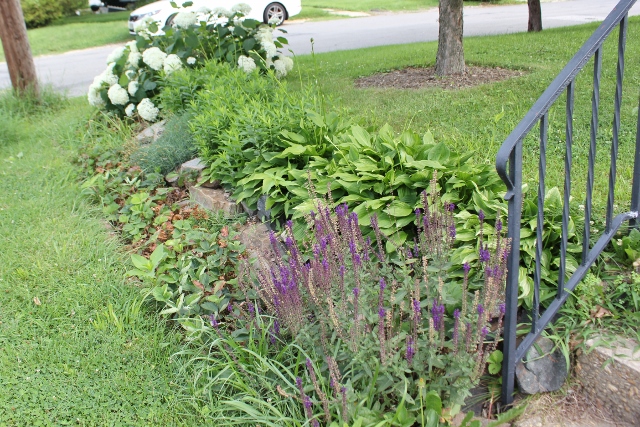 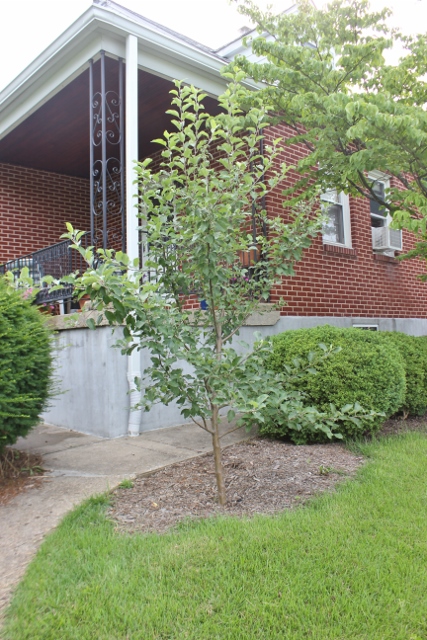 Finally, we planted the maple and red bud in 2008.  At that time, they were both just barely taller than us and now look at them! 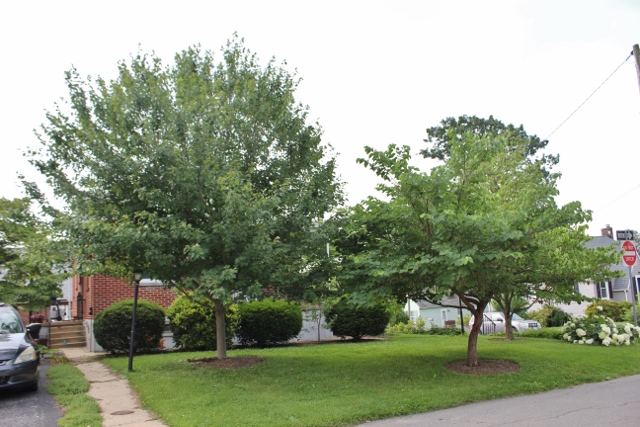 hooray for afternoon shade for our car!

Bless you if you’ve managed to read this far down through my own processing of the work that we’ve done on our yard since 2007.  It’s pretty easy to look at our yard and think that we’ve haven’t changed much and that we have so much work left to do.  But I am grateful to say that, just like our marriage, we’ve come a long way from where we started and we’re so grateful for what we have.

And, lest the start of this post be forgotten, I love you, Nik!  Here’s to eight more years and many, many more after that!

P.S. This is my favorite yard work post, EVER. (This one is pretty cute too.)