I’ve been sewing a lot over the past few months but haven’t managed to blog much about it all (or even put it on Instagram for that matter).  So, in no particular order, here’s what was keeping me busy in the sewing room in April and May!

My friends just keep having babies! Hooray! So I made five blankets in two months. (Luckily I can make these on auto-pilot now!) 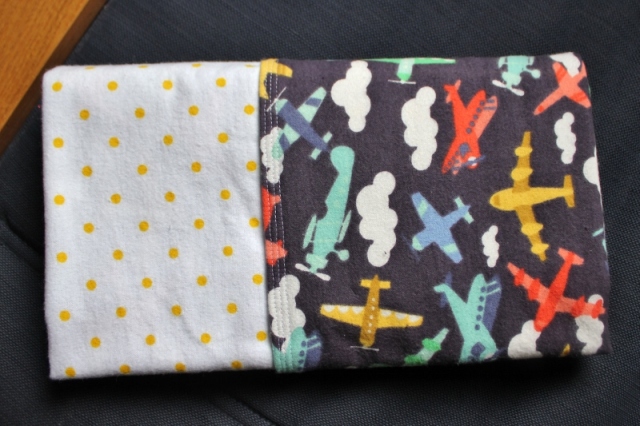 Our dear friends in Cambodia are having a little girl this summer and they said they thought it would be fun to have a pink elephant blanket for her to sleep on – because it doesn’t get cold in the tropics! 🙂

A friend of mine from church is having a baby this summer.  I couldn’t make it to her baby “sprinkle” but wanted to contribute something to it. So along with one of the boy blankets above (in the pile of three), I made a quilted card for all her friends to sign at the party.  I couldn’t decide on either of the two sets of fabric I’d chosen so I put on on the front and one on the back! I’ve made cards like this before (for two other friends).  This time I glued on all the pieces of fabric with a permanent glue stick and then just did an all-over quilting pattern.  It was SO much easier and accurate.  I loved making them this way! 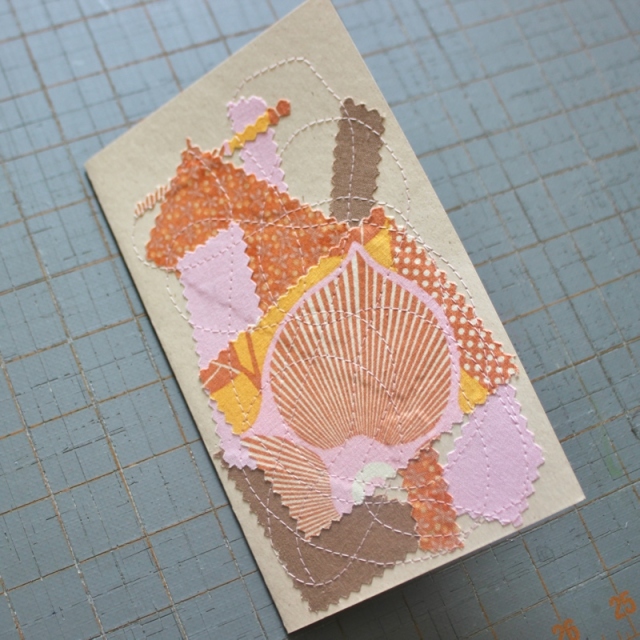 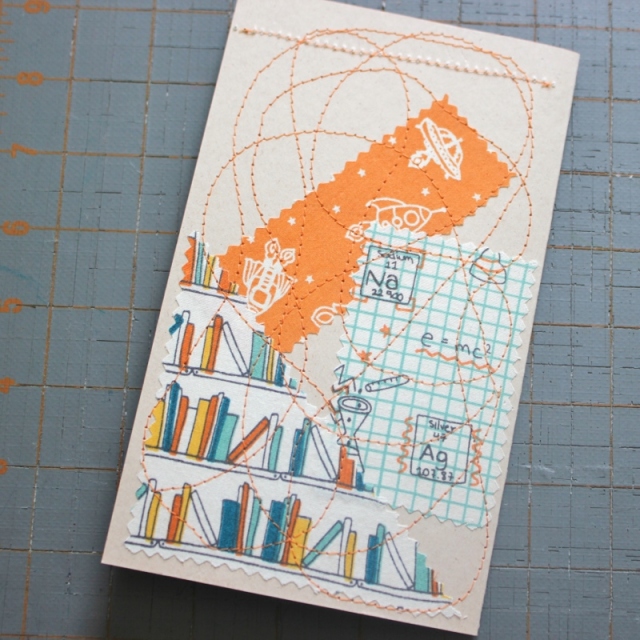 remnants from my sister-in-law’s diaper bag

love the “quilting” pattern that shows up!

paper sewn in for signing

Yiayia asked me to make an apron for Marko to wear at her house when they dyed the red eggs for Orthodox Easter.  She had found an Easter apron for Ellie so I just replicated hers for Marko.

I also managed to finish one more tote bag for B-More Bags before I had to pack up my sewing room and move it back upstairs. 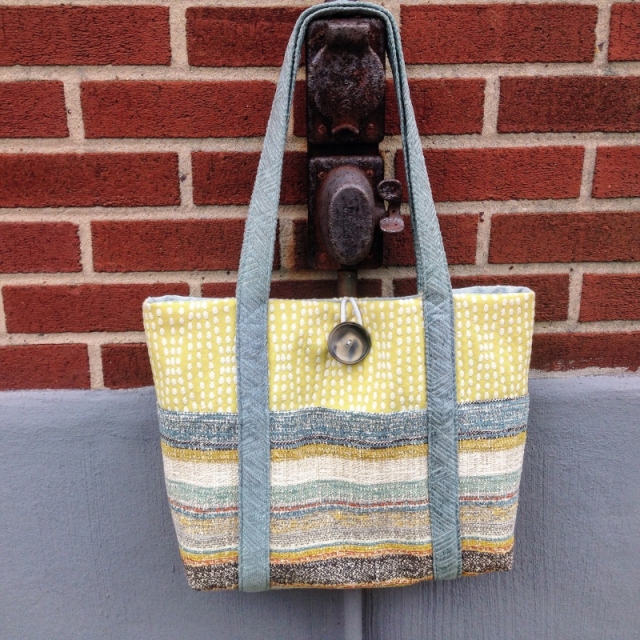 Nik’s cousin got married last weekend in Greece.  Nik’s dad went over for the wedding so we were able to send a small gift with him for her – an infinity scarf made from some gorgeous silk that was given to me. I have just enough left to make one for myself.  Infinity scarves are SO easy.  I’m sure I’ll be making more! 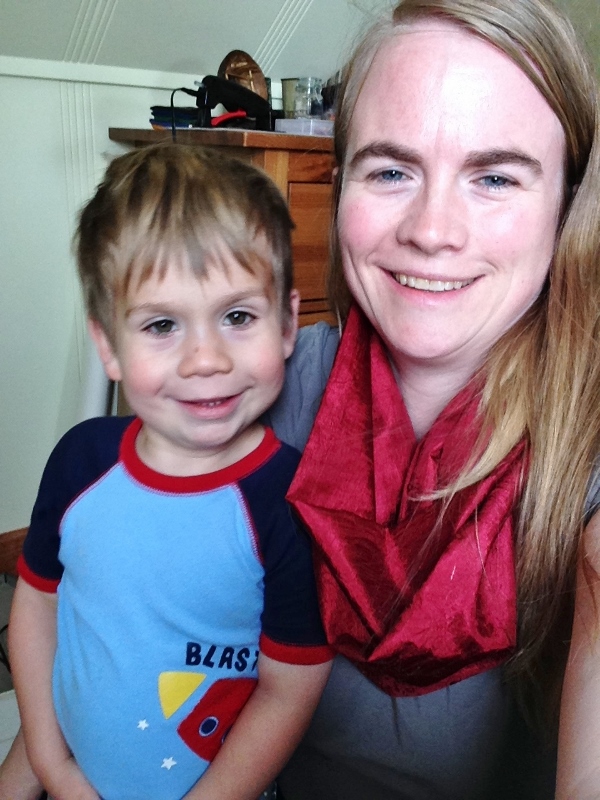 I made two more silk flowers from the bridesmaid’s dress for my mother and mother-in-law, along with a Greek flower for my MIL to match the ones I made for myself and my sister-in-law. Yiayia got hers on Mother’s Day.  My mother’s was a bit later than that!

I recently joined the Baltimore Modern Quilt Guild (so fun!!) and participated in the crayon color challenge in May.  We pulled three crayons out of a box at the April meeting and then had to make a mini-quilt using those colors (and those colors only).  I got orange, blue, and pink (bleh).  I ended up using the orange of the paper for the binding, the orange of the colored wax for the quilt, the blue of the paper, and the pink of the paper.  (Check out a crayon more closely – one crayon usually has three colors!) I didn’t buy any fabric for this.  I was able to just use fabric from my stash.

I accidentally made 8 teeny-tiny half-square triangles in my quest to make four for the front.  So the back got some HST love too! 🙂

Finally, although I had begun sewing these blocks (with different fabric) back in February, I decided to start again with the Modern HST Sampler quilt-along.  This time, I’m using quilting flannel in a really limited palette (only 3 fabrics plus the background).  This one is destined to be the special “you’re sick, at least you should get to cuddle under a really soft quilt” quilt. Here’s the first six.  I’m working on cutting out the next four and then I’ll be caught up! 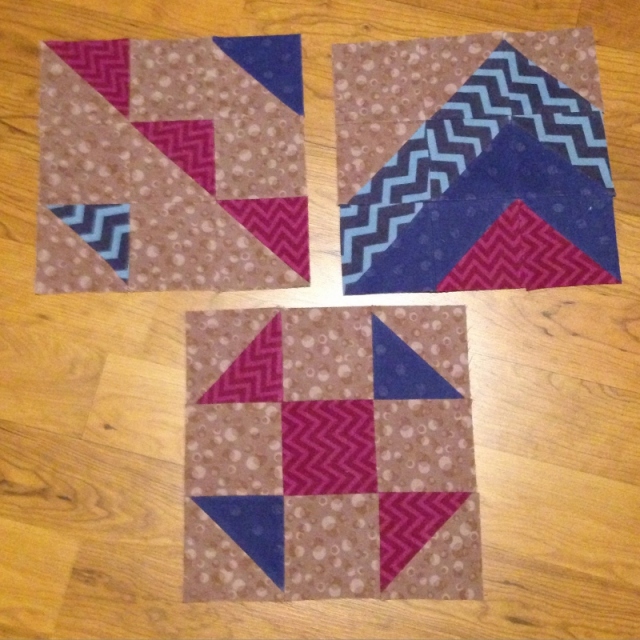 I think that’s it (at least everything that’s finished enough to show you)! It’s been a fun couple months filled with lots of quilting and flannel.

Like Loading...
This entry was posted in sewing and tagged Baltimore Modern Quilt Guild. Bookmark the permalink.