This year, when we decided to have an angel ornament as part of our annual ornament sale, I was surprised by the lack of simple angel ornament tutorials available.  All that I could find were either extremely cutesy and stylized or very complicated.  So this felt ornament is my attempt to merely give an essence of an angel.

We don’t know exactly what angels look like.  But there are definitely references in the Bible to angels dressed in white, some with gold sashes, and some flying and with wings.

So this ornament is my attempt to represent some of that, in a simple, hand-sewn ornament.  I hope you enjoy making one or many, as I have!

1. Using the template, cut out one angel in white.  If you’d like, you can trace the shape onto the felt using a permanent marker.  If you do this, be sure to cut just inside the marker line so that the marker doesn’t show on the ornament.  Otherwise hold the template to the felt and cut out the shape.

2. Put the white angel onto a rectangle of the cream felt.  Remember to leave space to cut a border around it.  Then, use two strands of gold thread and a running stitch to sew the angel to the backing felt.  This stitching will act as a decorative detail so try to get the stitches as even as possible.  The stitches on the back of this will NOT show in the final product.  Knot off your thread at the end of this stitching.

3.  Put the finished front piece onto a second piece of cream felt and cut around the outer perimeter of the angel.  At this point, it’s easier if you pin the two pieces together. 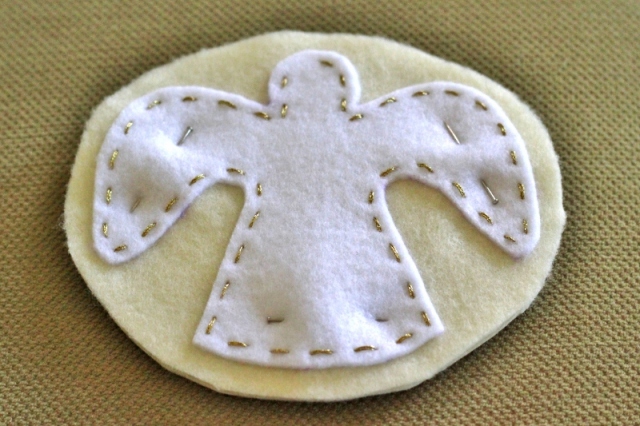 You could stop here if you want for easier cutting and just sew around the shape!  Also, ignore that one stitch missing from the angel’s head.  I ran out of thread but fixed it later!

Then cut out the spaces around the head and wings.

4. Take the two pieces apart.  Put a new piece of thread on your needle. (Use a relatively long piece so you’ll be able to sew all the way around the angel without needing new thread.)  Fold the ribbon in half to form a loop and sew the two cut ends to the inside of the front piece of felt at the top of the head.  Don’t go all the way through to the front of the angel when you are doing this.

5. Now finish the ornament. Put the two angel pieces together perfectly, with the ribbon emerging from the top. Put your needle through the back angel piece and begin using a running stitch to sew the angel together. 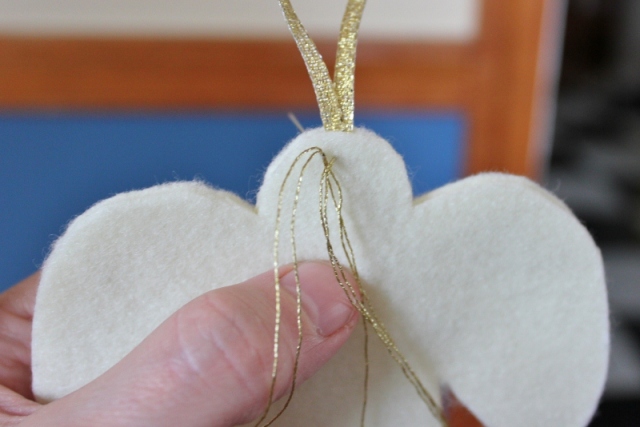 Then sew all around the outer edge of the angel.

Tie off your thread and you’re finished!  You’ve made a simple, easy, beautiful felt angel that looks perfect from the front and the back.

If you want, you can even make a heavenly host of angels!

Like Loading...
This entry was posted in sewing, tutorial and tagged angel, Christmas, felt, ornament, tutorial. Bookmark the permalink.