Ellie the Baker! (and a review of Kiwi Crate in case you’re interested)

Ellie’s aunt and uncle gave her a very fun present for her birthday last fall – a subscription to Kiwi Crate.  A box arrived every month for six months.  Each box had a theme, as narrated by Steve the kiwi [bird], with two projects to complete on that theme and an accompanying magazine.  I doled them out sparingly (as needed for my sanity) and we ended up covering a 9-month span.  So we just finished our last box a couple weeks ago.  It had a baking theme.  First, she got to decorate a “cake” (made out of foam), with “frosting” (really soft clay).

After the initial layer of frosting, she added some dots and swirls and then also stuck on the decorations, like candles and berries.

She also decorated an apron and chef’s hat with special crayons and stencils. 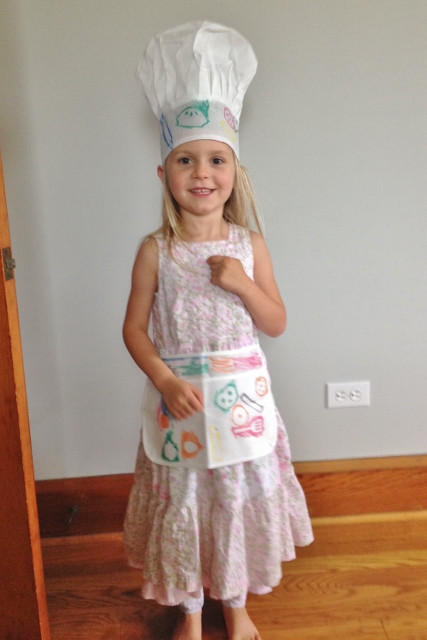 Over the course of the six boxes, we explored baking (awesome!), castles and catapults (super fun!), dinosaurs/archeology (OK), cowboys/Wild West (not so great), sports (OK), and winter (pretty fun).  Those reviews in parentheses indicate not my assessment of the subject matter but rather the quality of the projects.  As you can see, they were fairly uneven.  I wanted them all to be open-ended and engaging, projects that would allow Ellie to be her usual engaged creative self.  And for the most part, they were.  There were several projects, however, that were fairly closed-ended (i.e. able to be made or used only one way) and not that fun.  Those were the ones that ended up in the trash by the end of the day.  Ellie played with the cake and apron/hat for several days.

So I’m conflicted as to whether or not to recommend Kiwi Crate to you.  On the one hand, it was awesome.  Ellie loved opening the green box and sorting out all the supplies.  The green box also folds out flat to a scene with Steve the Kiwi, which Ellie painted almost every month. She had fun making the projects and loved telling friends and family about them.  On the other hand, some of the projects just weren’t that great.  Maybe my standards are too high?  In the end, Ellie would probably tell you that I’m crazy, that she loves Kiwi Crate, that Steve the Kiwi is a really cool bird, and that it was an awesome present.  So perhaps you should listen to her! 🙂

Kiwi Crate didn’t sponsor this post nor do they even know I exist.