Back in 2004, I decided to sew the names of all my nieces and nephews (plus my honorary niece and nephew) in cross-stitch.  As of 2008, I had finished three of them, finally got them framed, and gave them as Christmas presents at the end of that year.  At that time, I had to face the fact that I was never going to finish.  I started out planning to make five and it took me four years to do four.  In the meantime, however, everyone just kept having kids (which is a good thing, of course!) and now, 11 years later, I would need to sew a total of 22 of these things to get all my nieces and nephews plus my friend’s kids (as seen in this post).

I don’t even really like to cross-stitch any more and it’s so slow that I knew I would never get them all done.  However, I had made three of the five for my one brother’s family and I know what it’s like to be part of a family in which the older kids get stuff and the younger ones don’t.  (Actually, I don’t personally know what it’s like because I’m the oldest so I always got everything. 🙂 But I have heard my younger siblings complain about it.) So I forced myself to slog through and seven years later, here are two more! (The pictures are terrible and taken pre-framing, but you get the idea.)

I do love this pattern.  The individual letters are so fun.  (Cross-stitch just isn’t my thing any more.) 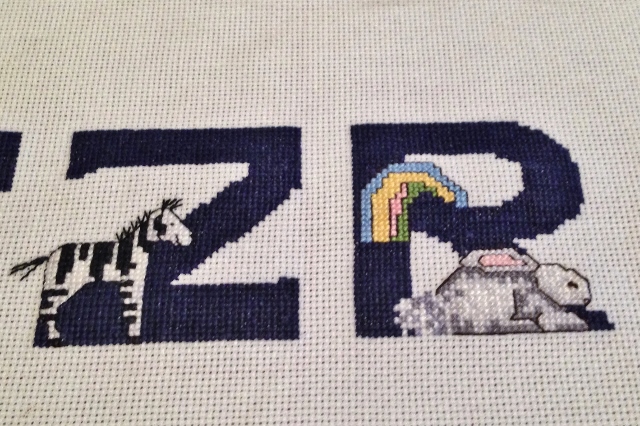 Z for zebra, R for rainbow and rabbit (the R first seen in this post) 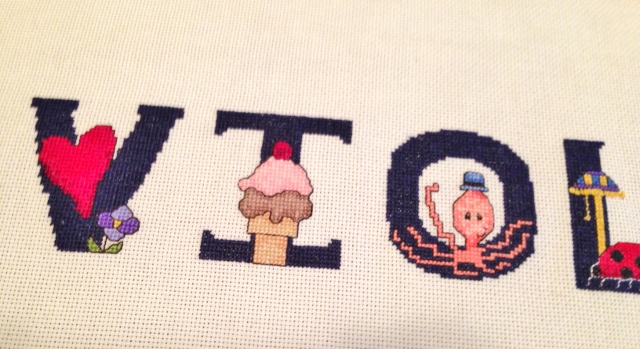 V for Valentine and violet (also Violet!), I for ice cream cone, O for Octopus,

L for ladybug and lamp, E for egg and elephant, T for top and turtle

So to Kaitlyn, Maria, Andrew, Adella, Alex, Annika, Gracie, Clara, Gabe, Ellie, Mark, Alex, Luke, Caleb, Abby, Ian, and Toby – your Auntie Laura/Aunt Laura/Mama loves you very much but she just doesn’t have it in her to sew any more of these.  I’ll sew you something else, OK? Just not cross-stitch!  It’s not you, it’s me! 🙂