Providing Identity Options (other than anti-princess) 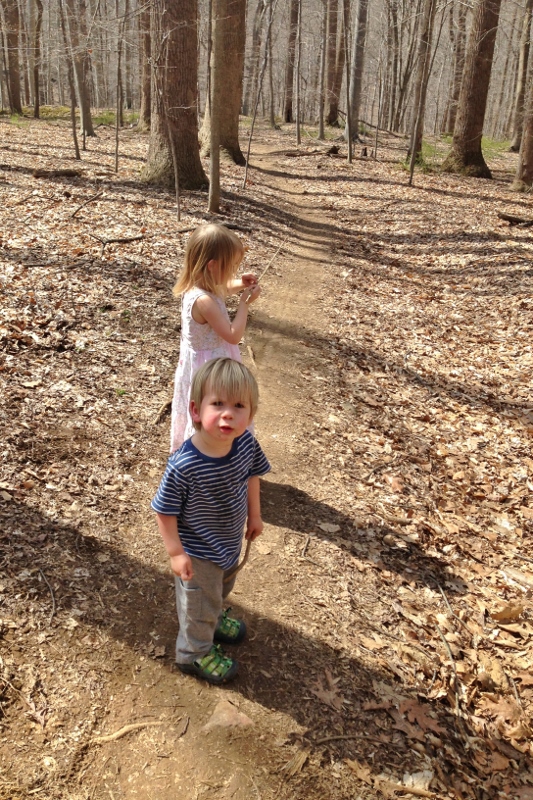 Mark and Ellie, who was too busy peeling her stick to look at the camera

Yesterday, we joining a hiking club for homeschoolers.  Mark was by far the youngest kid and Ellie was next.  She did an admirable job of keeping up with the bigger kids but about half an hour into the hike, I decided to have us turn around.  I was getting a bit tired myself from carrying Mark in the Ergo

on my back and knew that we faced a significant amount of uphill climbing on the return trip.  Ellie was sad to turn around.  She even told me, “Mama, I think my legs want a little bit more hiking!” Not too many minutes later, she was complaining of being too tired to walk any more so that confirmed my decision to turn around.

Part-way back, we stopped at the stream crossing to throw rocks, drink some water, and eat some snacks (including Easter chocolate that I’d packed as a bribe!).  Mark got down from my back and was THRILLED to be throwing rocks in the stream. It was a bit of a job to get him moving again.  Once we started walking again (uphill the rest of the way!), he was a hard worker himself and I didn’t have to carry him any more.

still peeling that stick, even though Mark was fed up with waiting for her! 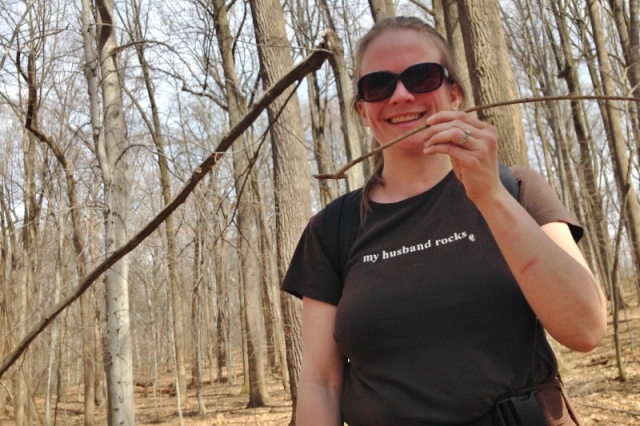 holding Ellie’s stick for the photo, at her request

Last night, as we were saying what we were grateful for (how we conclude dinner every night), both Mark and Ellie said they were grateful for hiking and throwing rocks.  As we were hiking out, it struck me that although Nik and I have worked really hard to keep Ellie from being obsessed with princesses (and largely succeeded), we haven’t tried nearly as hard to provide her with other images/identities to seize onto instead.

my first hike while wearing my new zero drop, minimalist “barefoot” shoes = success! (more blogging to come on that eventually)

Based on Ellie’s delight in running, exploring, being with the big kids, and being in the woods, Nik and I agreed last night that “hiker extraordinaire” is a great identity for Ellie to seize onto and one that we plan to cultivate.  We’re part of two homeschool hiking clubs now (although this was the first hike we’ve managed to do).  Give her another year or two and she’ll be big enough to keep up with the bigger kids.  I’m excited to keep on hiking!

For anyone local, we were hiking in Loch Raven Reservoir.  We’d never been on this trail before and it was fabulous.  The street address to get you close is 1704 Providence Rd., 21204.  Park wherever it’s legal on Providence Road (somewhere near the houses in the high 1600s) and then walk on the side of the street, just past the “entering the reservoir” sign).  From there you’ll see a trail going off into the woods to the left (west side of the road).  A bit into the hike, you’ll connect with another broader trail.  Follow that one to the left and eventually it ends up at the reservoir (or so I’m told).  Hopefully someday we’ll make it far enough to see it! 🙂

Like Loading...
This entry was posted in Ellie, Mark, parenting, reflecting and tagged anti-princess, hiking with kids. Bookmark the permalink.