This is my third post for The Classics Club.  I’ll be reading one classic book a month for the next 4-5 years.  Here’s the list of all the books I’ll be reading.  I’ll try not to include too many spoilers in my review but I may need to discuss some in order to fully review the book. I’ll warn you if I’m going to mention one.

This picture? Taken by me, of myself, while “reading”, i.e. staged.  I forgot to take one while I was actually reading MP!

Mansfield Park (MP) is definitely not my favorite Austen novel, at all.  The first almost-half of the book (until the play) is so painfully slow and boring that I had a hard time forcing myself to read it (hence, the over-a-week finish time).  However, for some reason, I started to engage a little bit over at the Austen and Motherhood book club with MP and had one thought-provoking discussion in particular.  So rather than write more generally about the book, I’m going to summarize my thoughts from that discussion in particular.

[Mild spoiler alert]  I’m going to be discussing what happens immediately after Sir Bertram arrives home from Antigua. It’s not super crucial to the story line but still, it’s a bit of a spoiler.  In MP, the children of Sir Bertram (Tom, Edmund, Maria, Julia), along with Fanny, the Crawfords (Henry and Mary, neighbors), Mr. Rushworth (Maria’s fiance) and Mr. Yates (a house guest) (who are all adults), decide to put on a play.  When Sir Bertram returns home early from a very long (like two year) business trip to Antigua, he immediately stops all play activity.  He, doesn’t, however, tell anyone why he disapproves.  He just orders all the props/stage/scripts etc to be destroyed and never says anything directly to the “actors”.  Someone in the book club posted this question:

I can’t stop mulling over the way Sir Thomas handled the whole acting scheme when he returned. He was very quiet about his reasons for disapproval- do we assume his children (and Fanny) all knew why he found the whole thing to be improper? I know it wasn’t just about his billiards table being moved, it was a deeper disdain for the activity. I think my tendency is to explain, explain, lecture, explain when I don’t approve of something my kids do. I can’t decide if his example is one to learn from or not.

Reaction to this question was basically in two camps:

My take on the question?

I think Sir Bertram’s calm, dignified response to the play was spot on – everyone clearly knew what they were doing was wrong (or should have known). Why else were they so upset when he came home early? They didn’t even ask for permission to keep going – they knew their time was up!  Not everyone had an appropriate and long-lasting turnaround in behavior, especially considering the events of the second half of the book. However, Fanny and Edmund certainly are convicted of their own misbehavior (by participating, even begrudgingly, in the acting). Interestingly, the two who do learn something are also the two who have the best moral/ethical grounding. And so perhaps Sir Bertram’s behavior in this situation can’t be faulted but rather we should fault the parenting that went on before when the kids were young.   Oddly, Julia and Maria lack the moral fortitude and character that somehow Fanny has in spades, even though she was also raised by Sir Bertram from age 11 onward.

I do think it’s possible for someone who generally isn’t doing a good job to stumble into the right response every once in a while! And I think the explaining probably should have started a lot earlier so that by the time they got to the play incident, Sir Bertram’s response would actually have been the appropriate one.

(And some personal reflection here): In the discussion about Sir Bertram, I also started thinking about the way that I parent my kids. Most things I have to explain to my Ellie but there are certain behaviors that she has now learned are expected – i.e. if she demands a snack, all I have to do is look at her with raised eyebrows and she very quickly rephrases her request into a polite one. Of course, this is after more than a year of asking her, “Please say, “I want a snack, please?” and then transitioning to, “How do we ask politely, sweetie?” and then transitioning to, “Was that polite?” and finally now, I can basically just ignore the impolite requests and she has the learning from which to rephrase herself. So that’s kind of how I’m viewing Sir Bertram’s behavior. For most of the kids, he didn’t do the work necessary to be able give the silent treatment but that doesn’t mean that it was the wrong choice in that very moment.

How about you?  Am I the only one who gives my three-year-old the silent treatment?

And, for those interested in the character of Fanny, you’ll probably enjoy this article giving Fanny the highest praise.  I agree with just about everything the author says about Fanny (i.e. that we should give her more credit than we do, that just because she’s an introvert doesn’t mean we shouldn’t like her, etc.) but I still think Mansfield Park is yawningly slow at times!

I’ll be reading The Awakening by Kate Chopin in April.  Join me if you’d like!

And, a couple outtakes! 🙂 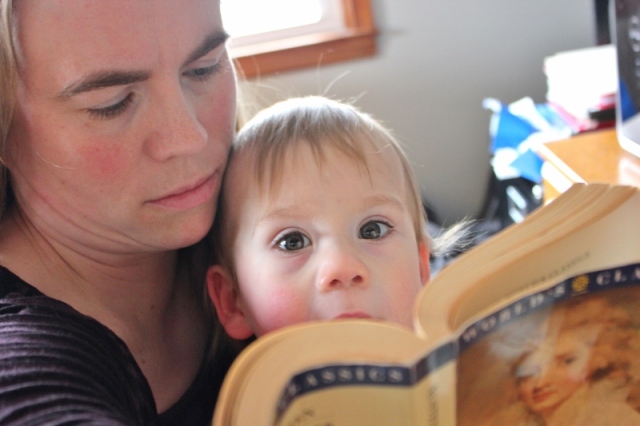 Like Loading...
This entry was posted in books, parenting and tagged Classics Club, Mansfield Park. Bookmark the permalink.