I designed it myself, based on a quilt in the book, Modern Quilts from the Blogging Universe.  The original quilt has just one neutral background color and only one size of block (finishing at 6″ square).  I added the stripes in the background fabric and added two more block sizes, finishing at 9″ square and 18″ square.  I also decreased the size, ending up with a finished size of 42″x60″. 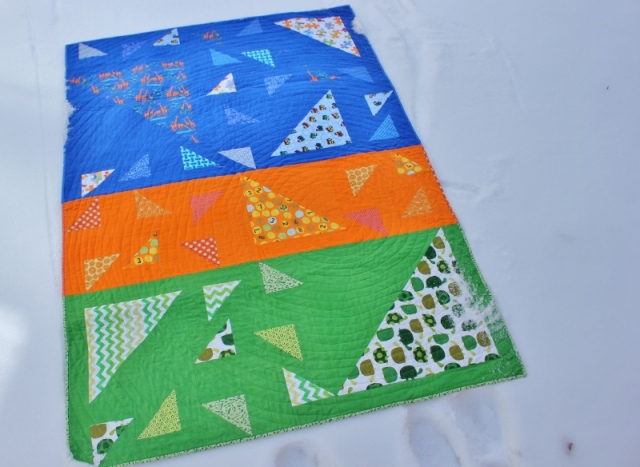 For the back, I continued the stripe theme but used big pieces of the prints from the front, adding some solid triangles (the other half of the half-square triangles that I made for the front). 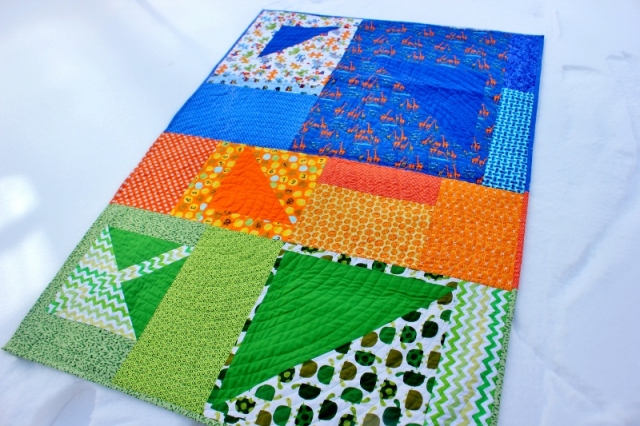 After sewing the front, I thought it was lacking a bit of something (movement?) and so I decided  to quilt it in a spiral.  This was the first time I’ve done a spiral and it was pretty hard (as evidenced by my terribly wobbly lines and super uneven spacing).  I also had the problem of deciding what color of quilting thread to use.  I ended up switching between blue, orange, and green thread to quilt it, changing colors every time I got to a new background color.  This was annoying at first but once the spiral was well established, I just did all the orange, then finished the green, then finished the blue so that eliminated much more bobbin switching. 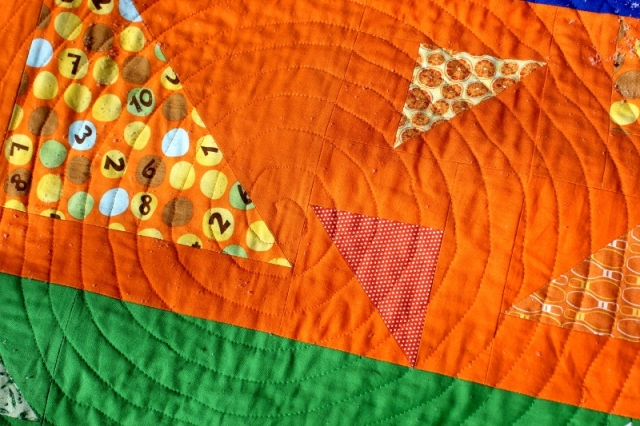 I deliberately started it off-center, knowing that I wouldn’t get it perfectly centered if I tried.  I like the feeling of the spiral falling off the rectangle in different places.  I think I’ll try spirals again because I love the end result.  I just need more practice! 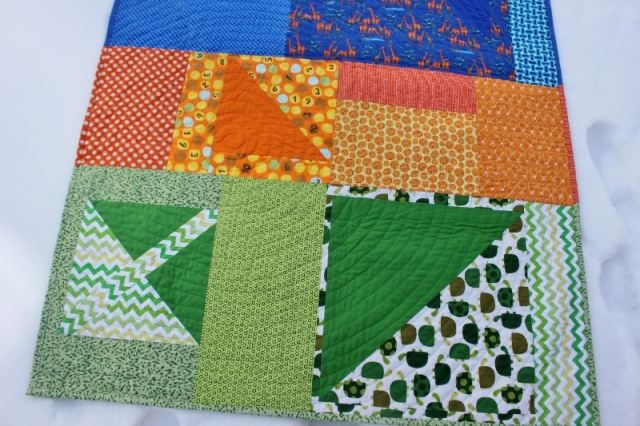 I think the spiral is easier to see on the back.

I had the same problem with binding as I did with quilting – what binding color to choose to go with such strong stripes?  In the end, I used the same solution as quilting – three colors.  I’ve also never done a color-blocked binding before but it was surprising easy.  I’m not showing you the other side of the binding, which didn’t end up so perfect.  I had to talk myself out of a lot of seam ripping and restitching to fix it (it is, after all, for a one-year-old). 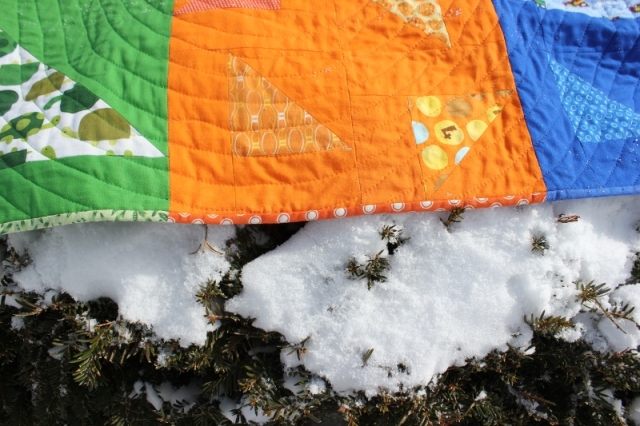 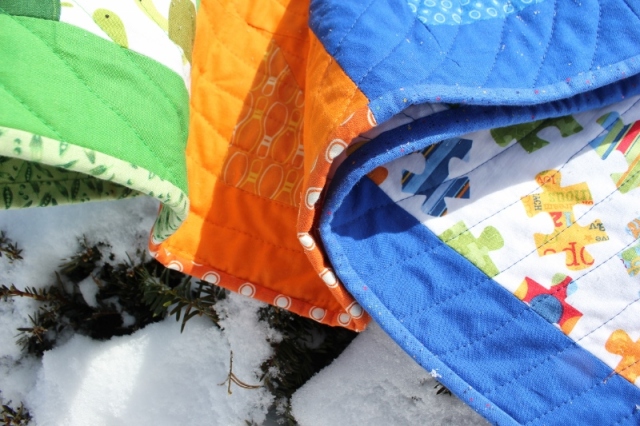 I had a surprising hard time finding different prints that had a colored (not white) background and which read, “boy”.  In the end, I did compromise on a few with white backgrounds, like the green turtles and these puzzle pieces which I adore. 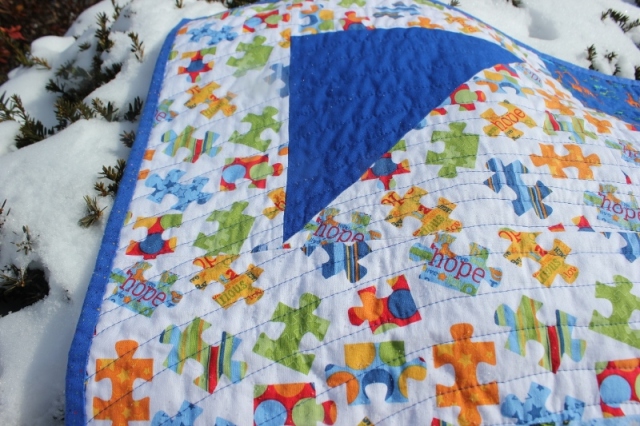 love the words on the puzzle pieces – hope, love, curious…

My “centerpiece” print was these giraffes, which amazingly have the perfect colors of blue, orange and green in them.  I actually purchased the solids before realizing that the giraffes fit perfectly!  (The solids are Kona Ocean, Orange, and Sour Apple.) 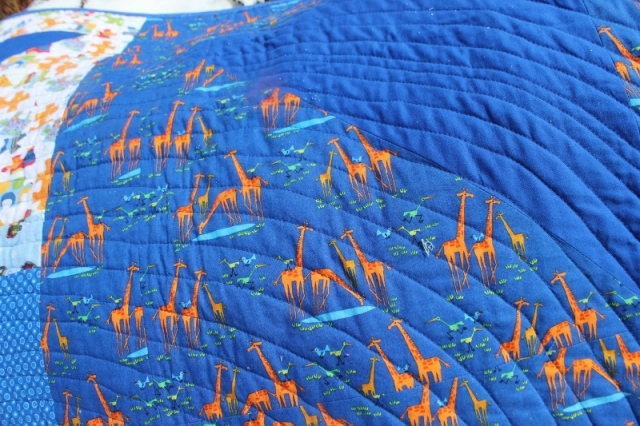 It was harder than I thought it would be to rotate the triangles in a way that was pleasing and didn’t repeat too much. 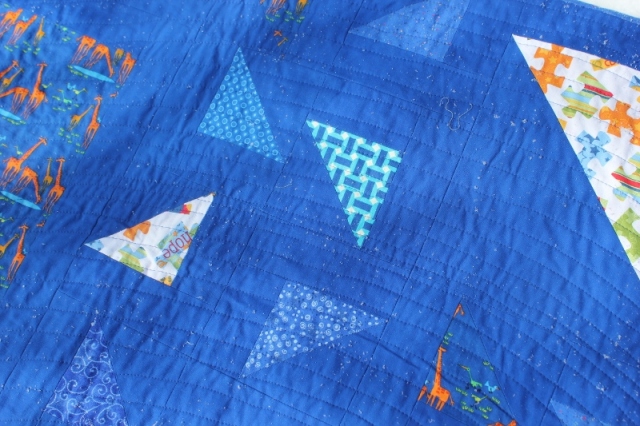 Close up, here’s the whole quilt, front and back: 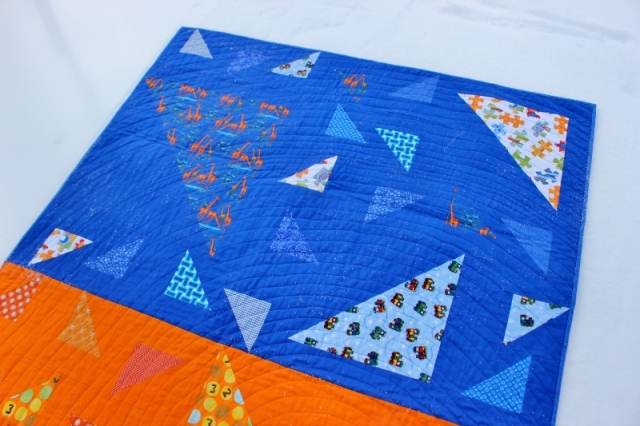 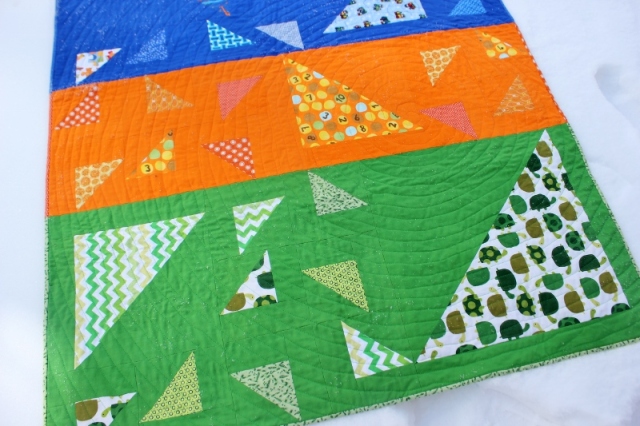 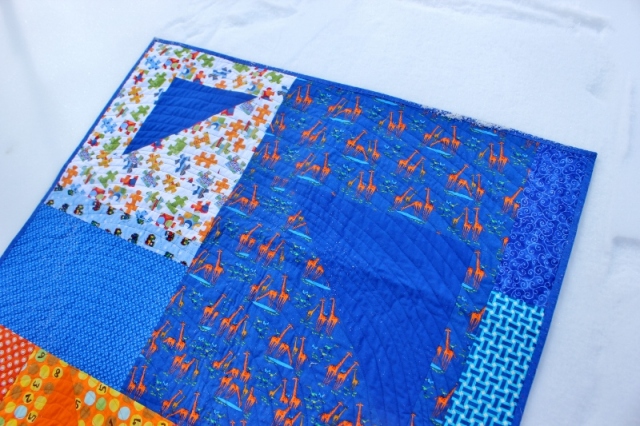 In the end, I wish I had used all small triangles on the front rather than adding the bigger triangles.  I added the bigger ones, wanting to be able to see the front prints a little bit better.  But part way through sewing the front, I figured out the design for the back (which I love, far more than the front) and in the end, could have kept all the front triangles small.  Oh well – I suppose that’s the way the quilting process goes.  I just keep on learning!  This was the first quilt I’d ever designed myself and it was an interested learning process for sure.  Now I’m itching to work on another one! 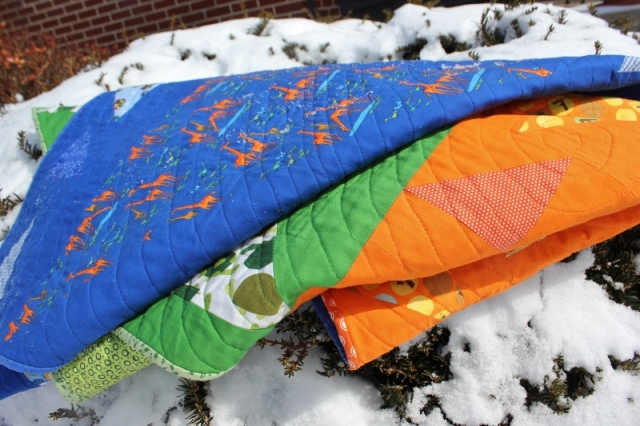 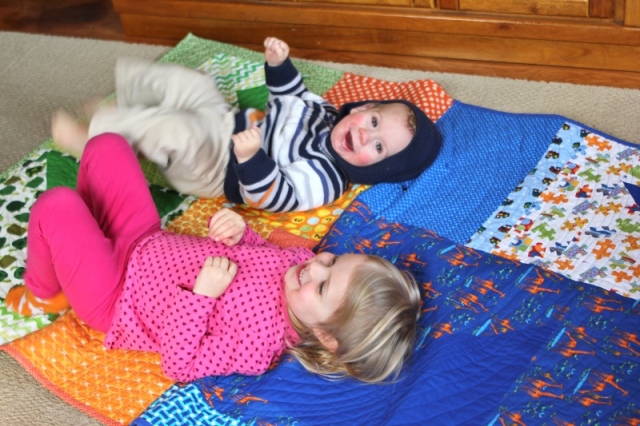 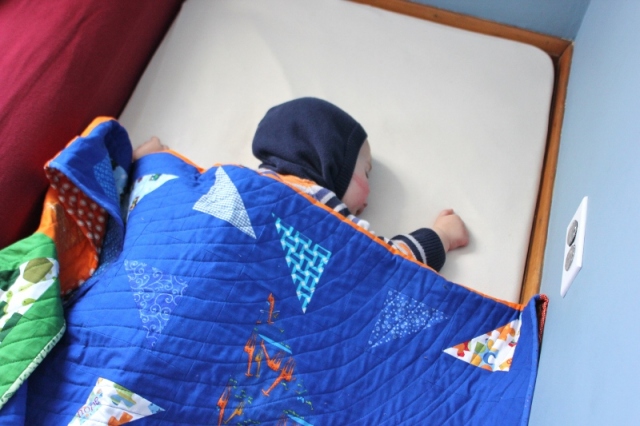 first nap with his new quilt!