1. Garden: Our first harvest (besides the overwintered carrot): arugula (not pictured) and radishes! 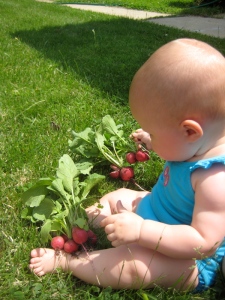 2. Yardwork:  The progress continues.  I’ve completed the mulch circles/rings/keep the push mower away under all three trees in A1 (find the map here). 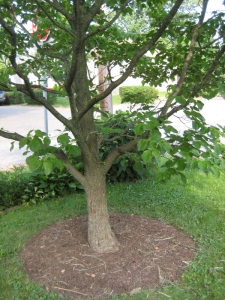 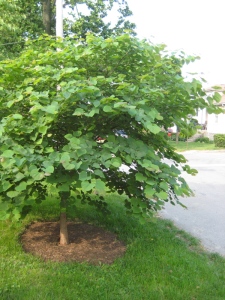 I also weeded the entire swiss chard bed in B1 now that the plants themselves are big enough to easily distinguish from the weeds.  We’re going to mulch it so hopefully the weeds will stay slightly more under control.  Favorite mulches, anyone? 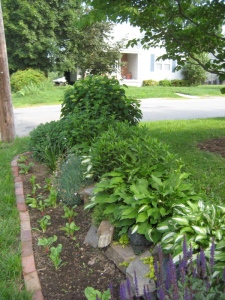 You can see the mulch circle of the dogwood in the top right hand corner.

And I’m currently worked on the bed below the big bushes in A2, reclaiming the sidewalk. 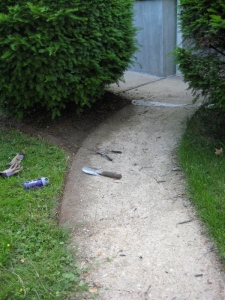 3. The snobbery:  See the water bottle in the above picture?  It’s a kid’s Nalgene that my college sent to me after I had sent them the announcement that Ellie was born.  Ellie is in love with my Nalgene so I like giving her this one because it’s small enough for her to hold relatively easily.

Here it is even closer: 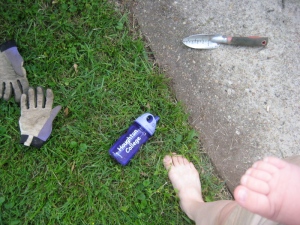 It was really nice of them to send me the water bottle (and probably good policy in terms of buttering me up to be a grateful, money-giving alumna).  Unfortunately, I cringe every time I look at it.  Why?  You mean it doesn’t just jump off the computer screen at you?

It doesn’t?  (Kelly, you probably have noticed by now.)  Fine, I’ll show it to you even closer.

Do you see it now?  It’s COMIC SANS!!  Gross!  Disgusting!  Gag me with a spoon! My least favorite font ever!!  The curse of being a teacher!!  And now I have to look at it every day because I’m too frugal to get rid of it and buy Ellie another one.  Really, Houghton?  Just because it’s for kids doesn’t mean you had to choose the “kid” font!  If I was your marketing department, I would have chosen the Houghton font and symbol (which by the way has been changed to a stylized H instead of the bell tower and I’m not happy about that either but that’s another story).  Don’t you want to start the brand loyalty early?

And so my friends, I’m going to end this post by complaining about a great thing that my college sent me for free because seriously, it hurts my eyes.  And I’m going to have to make sure Ellie understands that Mama doesn’t not approve of the font but she doesn’t believe in throwing things away just because they’re ugly.  So it will just have to hurt Ellie’s eyes too.

Have a great Memorial Day weekend!