And my first tornado too, for that matter!

Last Tuesday night/Wednesday morning (a week and a half ago), a tornado hit NE Baltimore. at around 1:00 am  We were just blocks from where it touched down and pretty much directly in its path.  This is highly unusual for Baltimore.  Although the tornado did not touch down in our neighborhood, we did have some really ferocious straight-line winds.  Thankfully, our house was fine but sadly, our neighbors on the opposite corner from us had a giant oak tree fall in their back yard.  It was actually ripped out at the roots.

Someone asked me if we had gone into our basement when the storm hit.  And I said, “No – we don’t have tornados in Baltimore!”  It never occurred to me that something like that could be happening.  The storm did wake me up, and I remember thinking, “I don’t want to know what is happening outside,” but then I just went back to sleep. 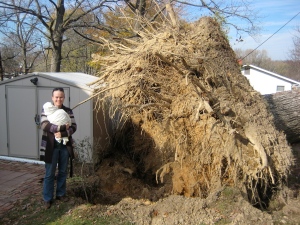 The base of the trunk 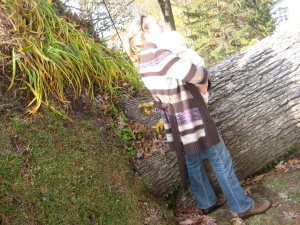 The contractor sitting on the tree next to Mark and Carol’s porch, discussing the mammoth removal job with Mark.

The top of the tree.  (This picture makes me think of that tree in Harry Potter, outside of Hogwarts, that tries to catch you with its branches if you get too close to it!) 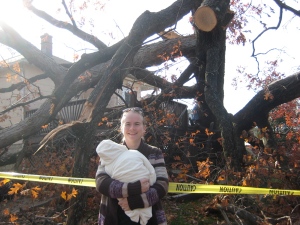 And our house, from Mark and Carol’s yard.

The oak basically only had one place to fall where it wouldn’t have crushed a house, and that’s where it fell.  We’re so grateful for that.  Mark and Carol’s deck is ruined but it could have been so much worse.

It’s amazing how big a tree becomes when it’s not up in the sky.

2 Responses to Ellie’s first tornado (and hopefully her last)