This is the dough that we use when making homemade pizza.  It’s also delicious as pita on its own.  We bake it in the oven on our baking steel

as well as grill it outside in the summer.  We use it for thin crust pizza and it has a really nice bite to it.  I haven’t tried it as a thicker crust although it does taste good as a thicker pita so it should be fine as a thicker crust as well. You’ll notice that this is only about 50% whole wheat.  I probably will experiment with upping the whole wheat flour in this but it’s so good this way, we don’t really want to change it!

We made pizza last Friday and I took some notes and pictures.  Look for an upcoming post about how to use this to make really delicious pizza at home!

cookbook
Yield: depends on how big you like to make your pizzas and how thick/thin you like your crust.  You should get approximate three to four 8-10-inch thin-crust pizzas from this.

Mix the water and yogurt together thoroughly. 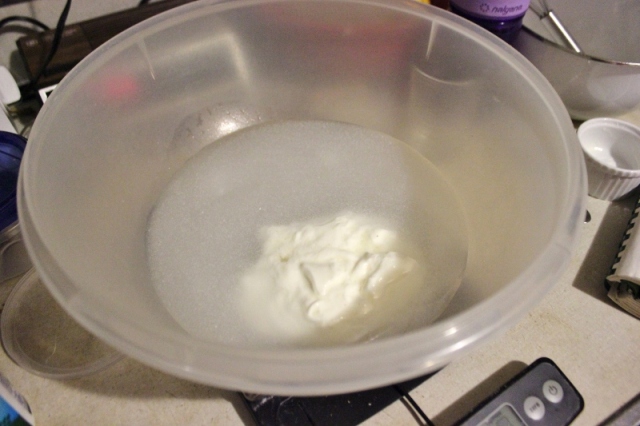 A whisk works best for this.

Add the flour and stir until fully combined.

I usually get about this far with a spoon and then do the rest of the combining by hand.

Stir into the yeast/water mixture until mostly combined. 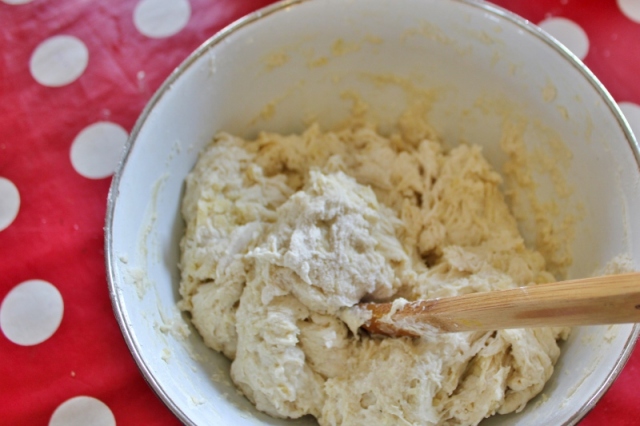 Get out your whole wheat dough that has been soaking.  You might notice that the outside layer of flour is signifcantly dark than the inside.  This is normal and just fine.

hard to tell in this picture but the outer layer is darker.

Into your stand mixer bowl, layer clumps of both kinds of dough until you’ve put in all of both doughs.  This process isn’t totally necessary but really eases the combination of the two different doughs. 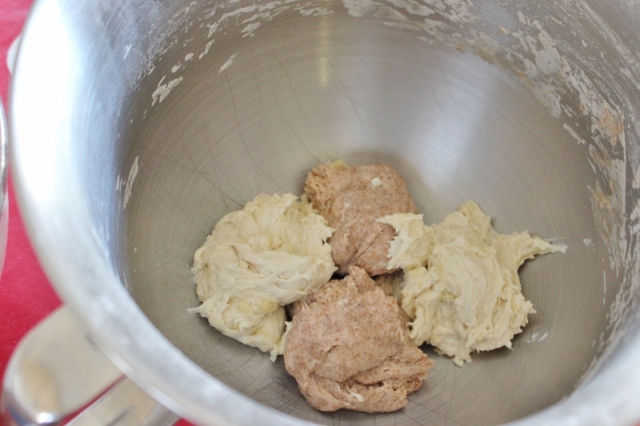 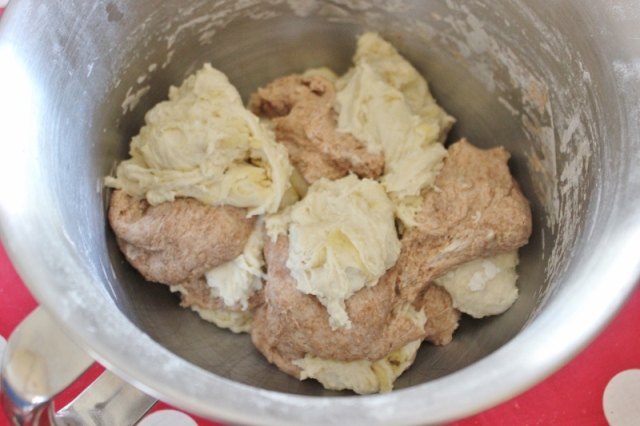 Start your dough kneading on low.  Fairly quickly, the two doughs will incorporate into one cohesive and uniformly colored dough.

just at the beginning of kneading

Knead for approximately ten minutes or until smoothy and stretchy.  You will probably need to add more bread flour to get to the right consistency.  This dough shouldn’t be very sticky because we’ll be rolling it out for crust or pita.  It should clear the sides and bottom of the mixing bowl. 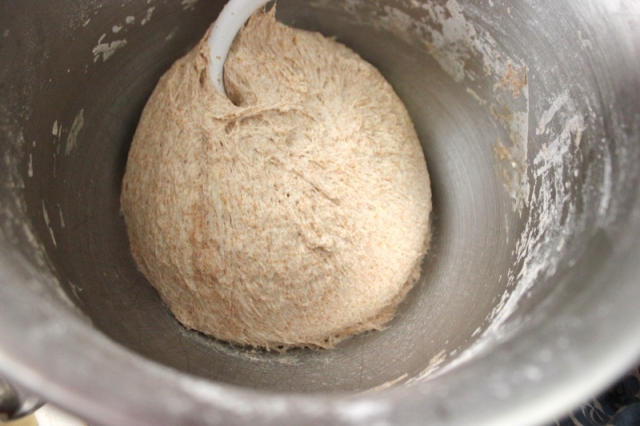 See how it’s sticking at the bottom?  I had to add a bit more flour. 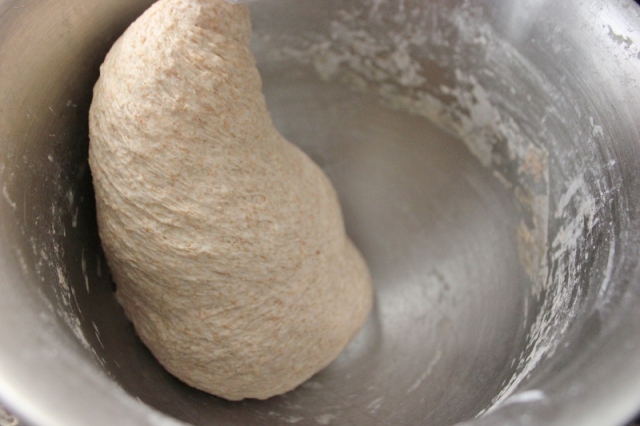 Now it’s clearing the bottom of the bowl. 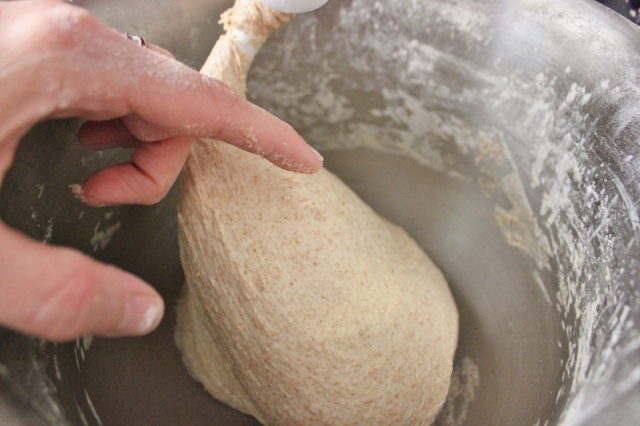 not really sticky at all

Place into a large floured bowl, cover with a damp cloth, and allow to rise until doubled, about 1-2 hours.

This is a double batch and I let it rise a bit too long.  Luckily, it’s a very forgiving dough!

At this point, you can either bake it for pizzas or pita or you can freeze it to use later.  We freeze ours in 300 g balls.  300 g is about right for one pizza for us.  You’ll probably have to experiment to see how much dough you want in each dough ball.  To freeze, sprinkle a baking sheet with flour and place the balls of dough on it so that they aren’t touching.  Freeze until solid and then place in a freezer bag for storage in the freezer.

To use from the freezer, allow for ample thawing time.  It does NOT work to defrost it in the microwave (big disaster, don’t ask me how I know).  I usually get it out in the morning and by early afternoon, it’s ready to use.  As soon as the dough has warmed to room temperature, you can use it.  It doesn’t have to rise again.

This post contains  affiliate links, meaning any purchases you make with them support our blog.  See the full disclosure here.

Like Loading...
This entry was posted in baking, recipe and tagged baking, crust, pizza, soaked whole wheat. Bookmark the permalink.