This is the project that consumed all of my sewing time in March.  I mostly enjoyed sewing it but was so glad when it was finished!

My friend Joanna and I collaborated on this project.  I shared with her my vision for translating  a specific section of row houses in our church’s neighborhood from brick into fabric.  She took our brainstorming, consulted a few pictures I’d taken, and came up with a wonderful sketch.  She did this when her baby was only a month old too!  Amazing!  I used that sketch and a grid to translated it into a full-size drawing (4’x5′). 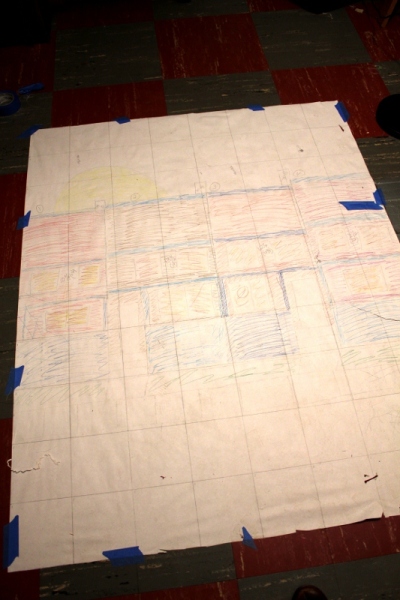 living on my sewing room floor!

I used that drawing to guide the making of the banner.  I made tons and tons of bricks (which I wrote about here) and used those bricks to make rowhouses.  I ripped apart the rowhouse that I showed you earlier because I decided it looked nothing like a Pen Lucy rowhouse and revamped my design.  After many fits and starts and despair that they would never be finished, I finally completed the block of rowhouses. 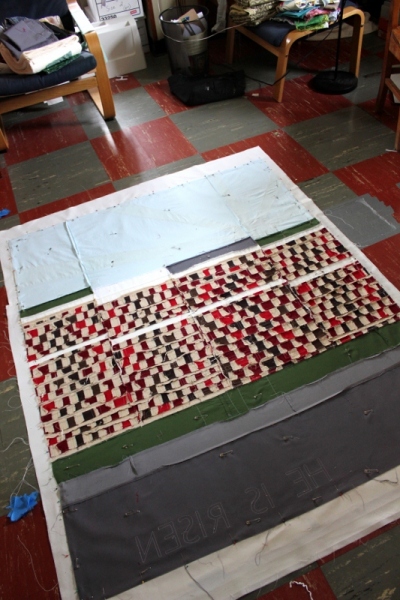 the back of the banner and proof that the bricks are made from many tiny pieces of fabric (and not a patterned fabric!)

At this point, I was basically despairing of ever finishing the thing because the rowhouses took me many, many more hours to make than I’d anticipated.  Thankfully, the rest of the banner came together quickly, including the sun.  I had been dreading making the sun because of the problem of making the rays get progressively bigger.  But then I just applied some basic slope of a line math and voila!   Nik, the math teacher, is always proud of me when I apply math, sometimes complicated, to my sewing (which happens surprising often, actually). 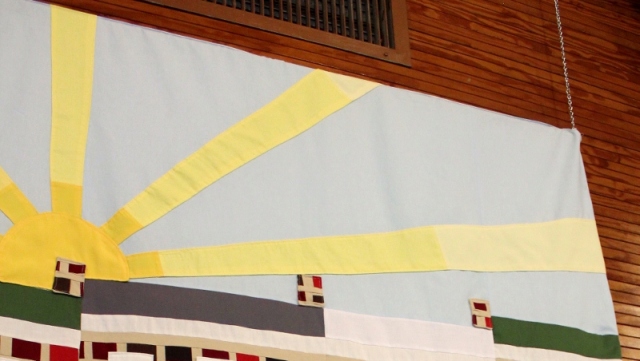 The banner really gave me fits towards the end, not wanting to hang straight and look smooth.  I had to resew the bottom section a couple times and it still didn’t seem perfect.  In the end, I treated it like a quilt, taping both the front and the back (which is made from thrifted curtains!) to the floor and then pinning the life out of it.  Thankfully, this worked and in the end, I managed to finish the banner with two days to spare!

Here’s a few more process details for any curious sewing minds out there.  After I made each set of bricks, I cut the bricks into two pieces (1/3, 2/3) to sew in the intermediate porch.  I then sewed on the two roof sections.  The rest of the rowhouse details (like windows, porch supports, door, and house number) are sewn on using turned-edge applique (although I did not use freezer paper to do it).

After I had all the details appliqued to the front of the rowhouse, I sewed a strip of blue fabric to the top of each rowhouse and then sewed all the rowhouse/sky combos together to get one block.  The rowhouses are slightly graduated in height so I couldn’t just do one big piece of blue.  Once I had the giant rowhouse/sky piece complete, then I sewed on the three strips for the grass, sidewalk, and road (which already had the words on it).  Then I sewed on the sidewalks, the sun, the rays, and the chimneys (made from brick scraps).  I used WonderUnder to fuse the people and letters to the banner and then I also sewed them on for good measure.

I’m also happy to say that I only had to buy the fabric for the sidewalk, the sky, and the road.  I had everything else!  I found the backing at the Goodwill in Waverly, on Greenmount.  I didn’t want to buy new fabric to waste on something that would never been seen and so I was thrilled to find the curtains, which were home dec weight!  I figured that by buying them, I saved them from the landfill and supported a good cause!  I simply sewed them right sides together and then flipped it right side out.  I didn’t even topstich the edges except for the top where it hangs.

I am proud of achieving my goal of using only solids in my design.  I enjoyed the challenge of using color and line to represent actual things without having the ease of using patterns.  I was trying for a really clean, modern look to the banner and I think I achieved that.  In the end, I learned a lot by sewing this banner.  I’m not sure that I want to sew another one any time soon though!

P.S. If you ever want to know how to sew bricks, let me know.  I’m now an expert at brick-laying and mortar!