The evidence:
1.  For Nikki’s baby shower, before Alex was born, Tina and I hosted a tea for her.  For this, we baked scones, in Tina’s oven.  And I burned them – badly.  I felt horrible – I was watching carefully, didn’t bake them for too long, and they burned anyway.

2.  For Thanksgiving, we splurged and bought a locally-raised heirloom turkey. It was a big spluge – they aren’t cheap, and turkeys are heavy.  So I did tons of reading on how to cook these kinds of turkeys.  Almost all recipes said to cook them only to an internal temperature of 160, some said even lower.  The USDA’s regulations basically overcook the turkey but do kill all bacteria – better safe than sorry.  Well, that’s for turkeys raised in feedlots where there’s lots of bacteria and bad stuff.  Our turkey was raised in a field just a few miles from us.  We weren’t scared.  So on Thanksgiving morning, I went over to Tina’s, we prepared the turkey together, put it in the oven at 325, and then went home again.  We went back to Tina’s about three hours later, expecting to find a turkey that had some time left but was maybe getting close.  Instead, we found this: 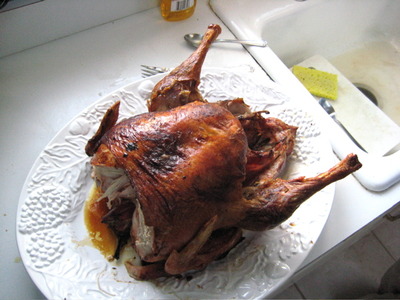 We’d overcooked our beautiful, expensive turkey.  We were a little devastated.  It actually turned out to taste really good and wasn’t all that dry, although the breast was not the succulent juiciness that we’d been anticipating.  And let me tell you, that skin was the best skin I’ve ever had – I could have just eaten turkey skin for dinner!

Tools of the Trade:
An oven thermometer

The impetus:
On Christmas morning, we were planning on baking my cinnamon rolls at Tina’s house.  And I was determined not to burn them.  So we brought our oven thermometer over with us to check Tina’s oven.

The verdict:
Her oven is 75 degrees too hot!  So we roasted our turkey at 400 instead of 325!  And we would have cooked the cinnamon rolls at 475 if we hadn’t checked.

The moral of the story:
Buy an oven thermometer.  It’s a good investment for everyone!