We were busy today!

Nik went up to Ocean City, NJ yesterday with Dan and Jeff to hang out with the guys for Memorial Day weekend.  So today, after church, I drove up to Tina’s and we had fun doing some plant shopping.  Then we came home and made some DRAMATIC changes to the front of our house.  First and foremost, we cut back some azaleas which were terribly overgrown. 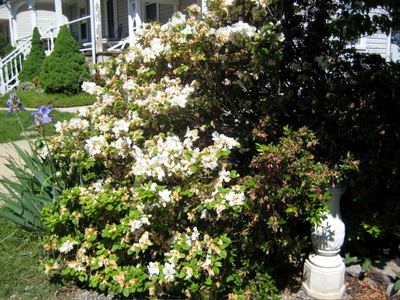 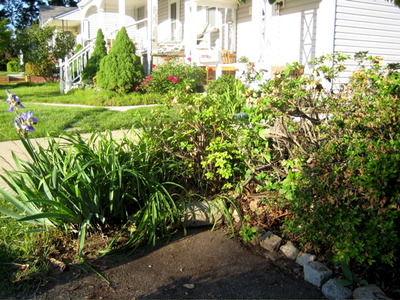 You may notice that you can actually see our neighbor’s house now!  You may also notice that we can finally see the corner of our driveway.  There were some really pretty stones in there and my neat soul is now satisfied by being able to see all four corners of our driveway.  Underneath the bushes that were growing over the driveway, there was some beautiful compost and the bushes were trying to grow through the asphalt!

And here’s the pile that we managed to create.  It’s huge!  We also pruned the dogwood back some and did some more pruning of other bushes too.  Tina calls pruning her “obsession”! 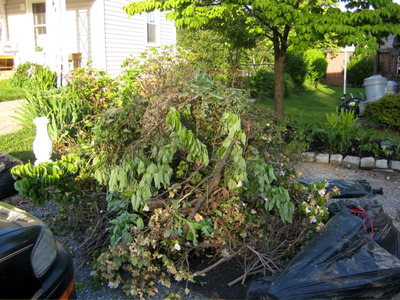 I am so, so glad to have those trees cut back.  They’ve been annoying me since I moved in last summer!  Unfortunately, some of the bushes we had to cut back almost the whole way so it will probably take them quite awhile to grow back.  They were so overgrown that the whole inside of the bush was pretty much bare and dead.  So, I was willing to sacrifice the bushes to get some order back.  We’re going to plant some hostas or something in front of the bushes to help cover them up until they start to grow back.

After we did all that chopping and pruning, we planted my very first perennial flower bed!  When we started there was nothing but lily of the valley everywhere.  There had also been a few random azalea volunteers and I already dug all of those out.  So, we moved the lily of the valley and then added Northern Sea Oats (the grass clump in the middle), campanula, black-eyed Susan, lavender, Shasta daisy, blazing star, hostas, and a few other random perennials that Tina gave me from her garden plus a few annuals.  I don’t have any idea how it’s going to look or if what I have will go together.  I also don’t really think that I like the lily of the valley the way it is now – in a border all the way around the bed.  But I guess that’s the beauty of perennials – whatever I don’t like, I’ll just move to somewhere else! 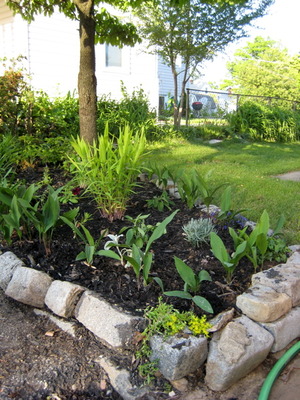 We worked for about four hours.  I am exceedingly grateful to Tina for helping me with all of this.  She is an amazingly hard worker.  She put me to shame!  It was so nice to have someone to help me get moving and to be brave and just cut things down.  And now I’m ready for bed!

1 Response to We were busy today!