Thank you for your prayers everyone.  Today, my interview went well.  It ended up being a group interview with all 3 ESOL teachers at the school and the principal.  It was pretty casual and often more of a discussion than a grilling of me.  So I was thankful for that.  The principal said that she would be contacting me within the next couple of days and it looks like I may have a job very soon.  So I’m grateful for that!

On another note, I’ll be sharing more pictures from my New York trip as I get around to shrinking them and putting them on here.  So here’s one – the famous Andy Warhol soup cans! 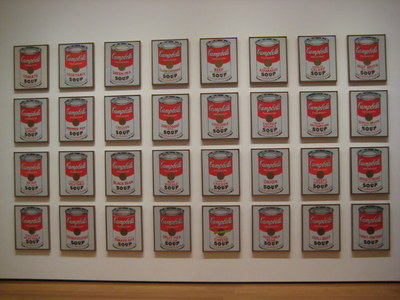 And, appropriately because of where my hotel was, an up close shot of one of the cans: 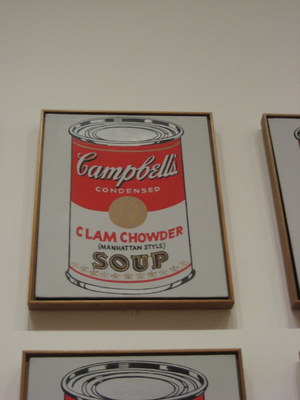 I had just a little over 1/2 hour in the Museum of Modern Art (MOMA) on Saturday morning.  So I blitzed through it, saw a few great paintings, and some ridiculous ones.  So be on the lookout for a future series, entitled, “I should have become an artist because my 3-year old nephew could have done that!”  (And speaking of art, when I was talking to Meggan today, she was clearning up the marker that Jonas had so kindly put all over the floor and couch.  Maybe she should have left the marker there and sold the house as an exhibit.  Tbey could have made tons of money!)